Last night during the Oscar broadcast, the Conservative Party of Canada ran this advertisement. I’ll let you watch it before we continue. I’m tired of these attack ads, but not because they’re rude and base-politics, but because it’s insulting to me specifically. The Conservatives are mocking the leader of Her Majesty’s Loyal Opposition for saying, “I wish my country were a little better.” I too wish my country were a little better, and it has nothing to do with who is leading our nation, it’s not a question of Harper vs. Ignatieff, it’s the simple fact that Canada is not, has never been, and will never be perfect, and so… Read More »Attack!

Dear Mr. Harper, Toronto has long been proud of our women and men in uniform who protect our city, and provide an invaluable service to its people. The security of the G20, however, has soured the People’s view of the Toronto Police Service, the Royal Canadian Mounted Police, and the Ontario Provincial Police. With videos and photographic displays showing what appears to be excessive force and an abandon of the Charter, Torontonians cannot trust their Police or feel safe. Obviously these videos and photos only show one side of the coin, and I do hope, along with all of my fellow Torontonians that the Police are honourable and were only… Read More »G20 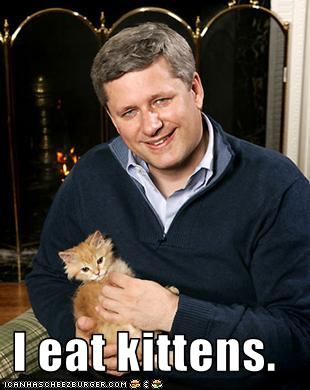 Today marked the second December in as many years in which the Head of Government has asked the defacto Head of State to prorogue Parliament. This wouldn’t be a problem if there was a practical purpose to end the session early, however, in both cases the Right Honourable Prime Minister has used this little-used Parliamentary tradition to serve his singular purpose. Last year, Her Excellency, the Governor General prorogued parliament on the advice of her Prime Minister to prevent an election or a coalition government forming. This year, Madame Jean had a precedence set, if he asks, she must grant; what happened to the oversight of the Crown? What’s the… Read More »Prorogation Part II