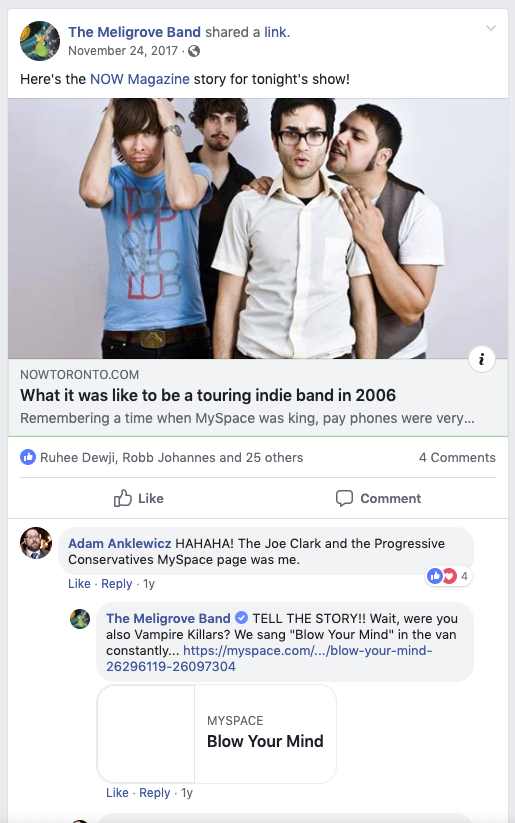 A friend of mine pointed me to a podcast that was doing an episode about MySpace pages. She wanted me to submit to them about my MySpace. They never contacted me, so I thought I’d post it here.

I was never a fan of MySpace, and I refused to have a MySpace page for the longest time. I enjoy good design and MySpace was the opposite of that.

That all changed one day when I was out record shopping and found a 7″ record from Canada’s 1979 federal election.

To give you some context, Pierre Trudeau had been prime minister since 1968. Joe Clark was the leader of the now-defunct Progressive Conservative Party of Canada and leader of Her Majesty’s Loyal Opposition (basically, the largest party in Parliament who is not forming government).

During the 1979 election, the PCs had a campaign song called “Let’s Get Canada Working Again” which was printed on 7″ vinyl for some odd reason.

I found this record in my local record shop and as a huge history nerd was excited. I took it home, listened to it, laughed at how bad it was and decided now was my time to enter MySpace.

I created a MySpace account for a new band. I called them… Joe Clark and the Progressive Conservatives. Sure, not the most exciting band name, but it worked. It asked for names of the band members, so I put in all of Clark’s cabinet ministers. I’m sure we can all imagine that Flora MacDonald was obviously shredding on guitar.

I uploaded the songs.

I didn’t tell anyone I knew that I had created this account. But I decided I needed to have my top 8 friends. So who did I choose? Well obviously bands I knew and loved. It had to be Canadian bands. I think I put in Neil Young, Sloan, Leonard Cohen, and some indie bands like The Meligrove Band. I never knew if anyone actually found the page.

Fast forward to 2018, The Meligrove Band were about to release their best record onto vinyl for the first time. They decided to do a reunion/farewell show that they had never done. Toronto’s free weekly, Now Magazine, did a piece on them.

Once we got added by a band called Joe Clark and the Progressive Conservatives. I went to their profile and it was just the music player full of the actual jingles from Joe Clark’s winning 1979 election campaign. I figured it was a young prankster from either the CBC archives or a fictional Tory youth group. Either way, those songs were awful.

I guess someone did find the page.