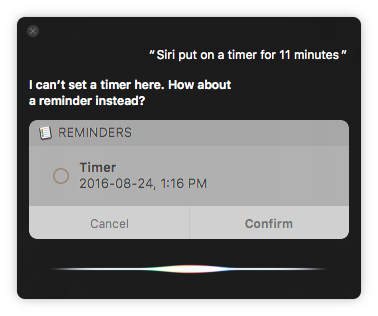 Apple has been seeding developer previews of macOS Sierra (10.12) since the Worldwide Developer Conference in June. I installed developer preview 6 and have been using that and version 7 since their release. Fortunately, everything seems to be running quite well. One of the features of 10.12 is Siri on your Mac. The one thing I use Siri for the most is the clock functions. Timers and alarms. I tried setting a timer on my Mac using Siri, and there’s no functionality for that in 10.12. Perhaps Apple will add this functionality. In the mean time we are seeing SiriKit being made available to iOS developers in iOS 10, so… Read More »macOS Sierra Beta