Animated GIFs are fun to make. I’ve made a few over the past few months. First we have a clip from the brilliant CBC show Twitch City. Just before this clip, Hope shows Curtis what TV was like before the cats took over. He gets excited seeing human TV. I don’t remember why Fry turned into a centipede, but I enjoyed it enough to make an animated GIF. This might have been the first I made. My Twitter friend1 tweeted about how awesome Sulu’s shrug and smile is here, so I made her a GIF. Finally, I just made this one. This is the full Shatner! Read: Fake Friend [↩] 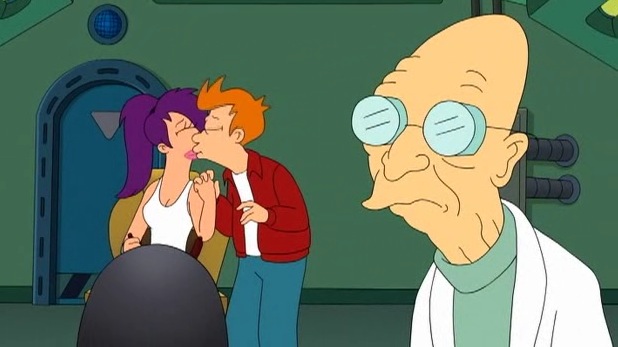 After a long absence, Futurama has returned to our television screens. For those unfamiliar, Futurama is about a man named Fry who at the turn of the millennium accidentally freezes himself and wakes up in the year 3000. The first two episodes have aired, and in the first one we find they’re just trying to quickly resolve any issues that existed from the previous direct to DVD film. It’s slow and sloppy and isn’t really worth your time. First Leela’s a robit, then Fry is a robit. Who cares? Also, who cares about those two loving each other. Boo! The second episode, however, is a return to form, as it… Read More »Futurama is back!